The talk about androgyny as a physical blend between two apparently biologic perspectives, is much more evident if it is identified with the patriarchy’s gradual crumbling away. Therefore we can introduce the argument looking through the eyes of a man towards the evolution of his emancipated clothing.

Monneyron(2008:110) highlights that in dress we can read ambitions and agonies of a man who’s looking for his sexuality, thus when we refer to the relation between men and clothes, we need to hint at some definition about gender.

As Elizabeth Wilson(2003) suggests, ‘fashion is obsessed with gender, it defines and redefines gender boundaries’. Therefore all thehistorical events occurring in less than a century (World Wars, economical crisis, youth movements, claim of sexual freedom and Feminism) definitely shook male identities, which became part of a global debate defining their shameless sexuality as a result of postmodern and individualist era, rather than a biological trait of the patriarchal and capitalist society.

“For man, limitation of fashion have been almost as stringent but for opposing reasons, because the history of masculinity has sought to deny the employment of any artifice in the creation of masculine identities. Men are not free, but are instead object to what Tim Edward calls ‘the anxiety and contradictions of masculine identity’. […] It is the fear and loathing of apparent or possible abnormality that causes most people to adopt and maintain proscribed and stereotyped gendered behaviours of femininity for women and masculinity for men. […] the bourgeois ideal of work and heterosexual relationships centring on marriage and childbearing grows to a great extent out of a notion of the nuclear family as an economically logical method of organizing a capitalistic, business-oriented society.”

“Freud recognized that the task of becoming feminine was a complicated and difficult one, perhaps never fully achieved. In all women, he suggested, a residue of the masculine survives (and in all men something of the feminine), and, consequently, ‘some portion of what we men call “the enigma of women” may perhaps be derived from this expression of bisexuality in women’s live. Femininity, Freud suggested, remains always to some extent unstable and insecure. In fact, he goes further, and argues that both sexes flee from the passivity that is implied by femininity.”

These theories strongly justify the fact that the imposition of separating sexes by means of clothing is a cultural construct, namely it is the result of superimposed sumptuary laws that aimed to define and control male and female roles and behaviours in everyday life. As Rebecca Arnold claims that

“since masculinity is held up as a signal of the ‘norm’ in Western culture, any deviation from conventional male attire is viewed with great unease. Exaggeration within the dress of those men who wish to step outside these somewhat rigid definitions has a long history, and exaggeration itself need only be slight to provoke moral anxiety” (Arnold, 2001:111).

Back to 19th century, Dandysm has been of course one of the most famous phenomena that put emphasis on clothes with the aim of breaking Puritan ethics of humility and subverting the meanings of masculine sobriety. Dandies wore also the clear sign of an identity crisis, which has tried to come out through the veil of an effeminate and elegant clothing. 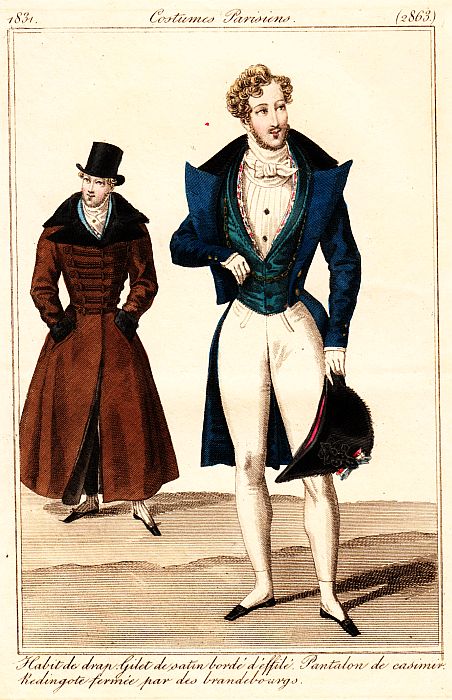 Moreover in respect to Simmel’s imitation and differentiation theories, dandies wanted to differ from those men wearing the constraining ‘black suit’, which they judged to be a grey, old, uncomfortable and anonymous uniform. Instead they wished they could express the sensibility concerning their sexuality without the necessity (neither the insolence) of yelling it out.

If dandies wanted to stand out the narrow mentality of their time, similarly we can describe this scheme working also for post-war youth cultures rebelling against their bourgeois societies. In other words, from hippies to Rolling Stones, the new “Great Male Renunciation” comes out in terms of sexuality rather than class distinction.

Hence, in the early seventies sexual freedom was acclaimed as the universal youth manifesto. Yet the refusal of gender constructions corresponded with an overall homologation, so as that androgyny would have become the new fashionable uniform and a shocking choice for anyone who could and had to choose the kind of “whoman”1 to become. Hence the crisis, again.

‘All the young dudes’: Crossing Over

“Life is not stylish. Neither is nature.”
Susan Sontag

Defined as ways of resistance undergoing similar trajectories, in the Seventies all the subcultures moved the first steps towards fashion, caught in their soul by smart entrepreneurs (such as Andrè Courreges, Vivienne Westwood, Elio Fiorucci or Ken Scott, for instance).

In 1970 David Bowie, an extravagant performer from London, makes out the new album ‘Hunky Dory’. On the cover we see the portrait of an androgynous being with long hair. Is it a man or a woman?

A man dressing up like a woman means using the body to talk with others in order to impose one’s inner nature, subvert the traditional language and empowers it of artistic virtue.

David Bowie was not the first one doing that, instead during the twenties Man Ray and Duchamp had already worked on this idea when focusing on the Duchamp’s pseudonym “Rrose Sélavy”. Nevertheless his cheeky thought has made men desiring to walk on platform shoes as the coolest thing in history of fashion. Therefore, the relation with art enriches such a condition, so as his declaration of bi-sexuality can’t be just seen as an impudent or extravagant attitude.

Since the White Duke was acclaimed as both the father and mother of Glam-rock style and member of Camp movement, his tendency to perform imaginary characters and conceptualize gender identities by the means of music has demonstrated other possible ways of thinking (Miller,2011:124), which have been exhibited in front of international spectators. He generated an artistic style moving away from the yet questioned gender boundaries. For these reasons we need to consider the role played by Bowie’s transvestism as a supporting thesis for the entry in society of the heterosexual fashion victim male in the early Eighties.

What do we mean by cross-dressing? According to Wikipedia(2016):

“After all the changes that took place during the 1970s, a large group was left without a word to describe themselves: heterosexual males (that is, male-bodied, male-identified, gynephilic persons) who wear traditionally feminine clothing. This group was not particularly happy with the term “transvestism”. Therefore, the term “cross-dresser” (which has the exact as the same meaning as “transvestite”) was coined”.

In order to deal with this topic through a sociological and anthropological standpoint, we should prefer the term Transvestism to Cross-dressing, which instead describes this practice as a traditional rite of passage.

Indeed, initiation of society’s adolescence will be represented by the birth of the “Fashion victim male”2 in the Eighties. As a matter of fact, glam rock has represented the definitive collapse of “Great Male Renunciation”, meant as men refusal of extravagant fashion in the behave of bourgeoise values.

“[…] Glam rock stars recovered this forefront’s hypnotic fluctuation which has been materialized both in disguises and in the ambiguity of a sound that provoked the existing aporia between commercial and underground, and it was appreciated by both average consumers and golden ears.”(Barile,2004:109-110)3

According to Alessandra Castellani:

“Transvestism becomes a possible space that organizes and disorganizes culture, as if it was the category of an epochal change that took place during the Seventies.”(Castellani,2010:71)

Moreover, if we compare it to androgyny, transvestism represents a vehicle, a complicated artificial means that by induction creates a new authentic identity, free of boundaries superimposed by ordinary clothing and on the naked bodies. From R&B to mods style, from Folk to Glam, the White Duke made a moderate and capable cross-dressing(Castellani,2010:71) and his hermaphroditism consisted of few meanings that overcame the sexual sphere.

First of all, Bowie aimed to use clothing as a demonstration of pleasure and evasion, in opposition to other youth subcultures that instead considered fashion apparel the Capitalistic society’s sceptre. In effects, with the artistic performance taking advantage over social and political criticism, many young people started playing clothing with the clear intent of showing their own personalities.

Thus, the total absence of political/social criticism made him one of the most strategic fashion system’s pawn. Both his own characters and then his audience climbed over the mass inclinations.

As Taylor and Wall argue:

“Bowie has in effect colluded in consumer capitalism’s attempt to re-create a dependent adolescent class, involved as passive teenage consumers in the purchase of leisure prior to the assumption of ‘adulthood’ rather than being a youth culture of persons who question (from whatever class or cultural perspective) the value and meaning of adolescence and the transition to the adult world of work.”(in Hebdige,1976:60).

Therefore again, the passage from adolescence to adulthood is delayed and the wider participation of both men and women in fashion will be verified especially after the eighties’ economic recovery. Along with the seventies men stopped fighting in ‘duels’, rather they preferred competing in clothing, proud to display their feminine part with no regrets. At the same time, it seems a paradox thinking that while the feminist movement was yelling against sexism and taking away girls from runways, men started walking on them (and, if we think about The Yves Saint Laurent’s tuxedo suits, we see how generally the fashion system was proposing emancipated, yet masculine women too). Even though David Bowie was an idol for a more specific audience, his image was promoted by both fashion houses and stylists, and consequently it pushed men in fashion, not with the aim of appearing more elegant, but rather to establish themselves in a world that in the Seventies was becoming strongly competitive.

His persona(-ges) worked as the perfect mediator between subcultures and mainstream, as well as between male and female bodies. Therefore he represents the social wheelie towards the wedding between fashion and style. In particular, we can refer to his androgynous body as the meeting-point between sexes and to his wardrobe as the peacemaker between rebels style and fashion addicted.

Speed and Collapse: the eye of the storm

With Subcultures: The Meaning of Style (1979), Dick Hebdige bring up relevance and popularity to British post-war young cultures, such as Skinheads, Hipsters, Beats, Punks, Rockers, Mods and Teddy Boys. In particular, it notices how style significantly projects the immaterial need of belonging to a social group into material objects, whereas political and local contexts influence the definition of each individual form.

Hebdige’s analysis makes evidence of a double nature concerning the definition of a culture. Therefore, the term works in two different dimensions. The first one is much more classical and conservative, while the second one is rooted with anthropological theories and the eighteen century, referring to a

In other words, an observation as such allowed fashion companies to understand the existent relationships between those elements that would characterize a particular lifestyle.

Why is Hebdige’s thought so relevant?

There are two prevailing reasons for which the book is so successful. Firstly, its publication takes place in 1979, in other words it appears in the market when the empowerment of fashion industry and the overall acceleration of sales strategies gives birth to the future Fast Fashion system that, as we will see in the next chapter, will increase its interest for young people and subcultures year by year (and will adopt the personality’s stratagem).

Secondly, the growing interest of both social studies and market to all the existent subcultures, will paradoxically transform them in real ‘cult’ as it happened with Sex Pistols, defined as “The Great Rock’n’Roll Swindle”1.

1“The Great Rock’n’Roll Swindle” is a mockumentary directed by Julien Temple in 1980. It centers on Sex Pistols and Malcolm McLauren.